The Sin of Texting While Driving 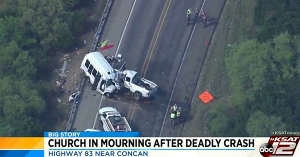 You may have heard about the bus crash involving a group of senior adults from First Baptist Church, New Braunfels, TX. The crash killed 13 people and in the last few days it has come to light that the 20 year-old driver of the truck that struck the church bus was engaged in texting while he was driving.

You’ve seen people texting while they drive. You’ve probably done it yourself. I’m not throwing stones from a glass house; I admit that I’ve done it. Although, I’m made a conscious effort to stop. One reason for this it that for several years a major portion of my job consisted of driving from worksite to worksite and I was always shocked that while driving on one major highway, I typically saw more people texting on their phones than not texting on their phones. I could usually tell because the car was swerving or failing to maintain a constant speed and, more often than not, when I would pass them, they were on their phone.

Texting while driving is, not only potentially against the law, it is a sin.

Wait! There’s nothing in the Bible about texting while driving, how can I call it a sin? Let me explain.

Texting while driving is a form of placing ourselves first. It’s selfishness. It’s saying, “My conversation is more important than the risk to your life.” It’s careless, reckless and selfish and it’s saying that I am more important than anyone else who’s trying to go to work, pick their kids up from school, or go to the store. It’s saying that I want to do what I want, regardless of it’s potential effects on others. And that is sinful.

Commit now, put others above yourself and put the phone away while you drive. Don’t trade someone’s life for a text.

Posted in Jesus and Life