Football and the Fruits of the Spirit

What does a football player and a prisoner have to do with the fruits of the Spirit? Let me tell a quick story.

If you happen to watch the Denver Broncos- Pittsburgh Steelers games then you may already know what story I’m talking about. 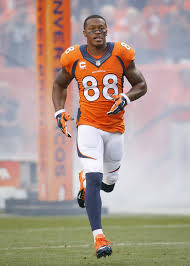 In what was already a high stakes game, one Denver Broncos player had a little more reason to be nervous. For the first time ever, his mom would watch him play football. For the first time, Broncos wide receiver Damaryius Thomas, had his mom, Katina Smith, cheering in the crowd.

Katina Smith didn’t miss games because she was estranged from her son. She wasn’t sick and unable to travel or against the dangers of playing football. She was unable to see her son play because she was in prison.

When Damaryius was 11 years old, his mother was sentenced to twenty years in prison for distribution of crack cocaine. His grandmother was sentence to life in prison. During the next seventeen years, Damaryius went on t0 play football, basketball and run track in high school. He continued to play football at Georgia Tech and was drafted with the 22nd pick by the Denver Broncos. In the 2013 season, he set the record for number of catches in a Super Bowl in his team’s loss to the Seattle Seahawks.

All this while his mother sat in prison.

Now we can all agree that Katina Smith made a bad choice- choosing t0 distribute crack is a bad choice. And what she gave up as a result of that choice was huge.

It makes me wonder what things I have unintentionally given up because of choices I have made. In a positive way, I’ve given up or avoided negative things by making good choices. But I may have also unintentionally given up or passed on good things because of bad or unwise choices. We all have those “what if” scenarios in our lives and while dwelling on them may be harmful not acknowledging them may be just has harmful because we can begin to believe that our choices don’t have consequences- whether good or bad.

Sowing and reaping are agricultural terms and earlier in Paul’s letter he tells us what fruit we will reap if we sow in the Spirit: love, joy, peace, patience, kindness, goodness, faithfulness and self control.

How does this idea of sowing, reaping and reaping the fruits of the Spirit influence our choices and the “what if”s” in life? I’ll attempt to look at that next time.

This entry was posted in Jesus and Life and tagged Apostle Paul, choices, fruits of the spirit, reap, sow. Bookmark the permalink.